One of the most photographed historic sites in New Jersey is the Red Mill in Clinton, New Jersey. Situated along the South Branch of the Raritan River and across from the main drag in the town of Clinton, this idyllic red mill with a working waterwheel has been a popular spot for fishermen, families, and photographers. Dating to the early nineteenth century, this mill continuously ran for well over one hundred years, providing a number of products to suit agricultural and industrial needs in Hunterdon County and beyond. Today, it stands proud as a reminder of our early industrial roots and of simpler times along the banks of the old Raritan. 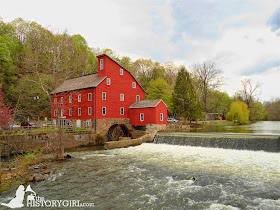 The Red Mill
The land surrounding the present-day mill was purchased in 1782 by Daniel Hunt. Daniel purchased 529 acres on both sides of the South Branch of the Raritan River. He sold the property on the west bank to his sons Ralph and Benjamin in 1799. The earliest section of the present mill was constructed about 1810 by Ralph Hunt. Ralph used the mill to process wool. However, just a few years after being built, the domestic cloth market went into a downturn and by 1820, the business was in ruin. Ralph lost his property, totaling more than 400 acres. He defaulted on his mortgage and the property was sold by the county sheriff the the Archibald Taylor family.

Archibald turned the management of the mill over to his son John B. Taylor and his financial partner, John Bray. Together they operated the mill from 1828 to 1834. They continued running it as a woolen mill but expanded its scope by grinding flour, feed, and stone plaster. These two men changed the name of the area from Hunt's Mill to Clinton, in honor of popular New York governor DeWitt Clinton. Together they opened a dry goods establishment, by 1834, the businesses were failing and it was sold at a loss to John W. Snyder. Snyder retrofitted the mill for grist but he also fell into debt and lost the property in 1841. It was owned by Daniel Ridgeway from 1841 - 1842 and then the Easton Bank from 1842 - 1847. The bank split the site between the mill and a quarry. Ownership changed six times between 1847 and 1873. In 1873, Philip Gulick purchased the mill and continued to grind grist and made peach baskets. After Gulick's death in 1901, his wife rented the mill to brothers Elmer and Chester Tomson, who purchased the site in 1905.

The Tomsons changed the mill from grist to graphite, which was used to blacken cast iron stoves. The black graphite dust was unpopular with the townspeople so the mill was changed once again to grind soapstone to produce talc for the Colgate Company. In 1928, the mill was sold to the Clinton Water Supply Company, ending its 118 years as a working mill. When it closed, it was the last operating talc mill in the United States.

The building changed in appearance and size throughout its operating history. When it was originally built, it was most likely a three-story gable-end structure with an open waterwheel. As technology and purposes changed, the mill was enlarged to four stories high and five bays across by the mid-1800s. The roof also transformed from a gable to a gambrel design. Photos also show that a portion of the building was open, so that carriages and wagons could drive through the building in order to be loaded from the bins on the upper floors. Evidence of a large hopper on the top floor still exists today. The waterwheel was eventually enclosed in a wheelhouse which was constructed off the main section of the building over the mill-race, where water was funneled in to operate the waterwheel before it left the mill via the tailrace.

In 1903, a water turbine was installed. A turbine is more efficient than a water wheel because it the wheel spins horizontally rather than vertically. In 1908, the mill gained its unusual architectural feature, which makes it stand out from most other mills: the monitor. The monitor is located on the side closest to the river and extends almost one full story in height above the roofline. Its purpose was to let light and air into the mill and contained pulleys related to the mill elevator.

In 1960, the property was acquired from the Town of Clinton by the Clinton Historical Museum to became a museum village.  After three years of restoration and site maintenance, the Clinton Historical Museum opened to the public. In 1964, the quarry, its buildings, and grounds were donated to the museum. The nonprofit restored quarry stone crusher, the mill workers tenant house, the quarry office, and various outbuildings. To compliment the mission of the organization, the Bunker Hill School House was moved to the site in 1974, and a replica log cabin and spring house were constructed in 1976 in honor of America's Bicentennial.


The Mulligan Limestone Quarry
In 1848, two brothers, Frank and Pat Mulligan, purchased a large hill and lands surrounding the mill from the Easton Bank. This land was rich in calcite rock, also known as dolomite limestone. The limestone could be crushed and used in road construction, ground to make mortar, or burned in a kiln to produce a fertilizer. The limestone had been mined for many years before the Mulligans acquired it and as they arrived in the area between 1837 and 1842, they worked as day laborers burning lime. Another brother, James, joined them in 1858 and operations rapidly expanded.  A two-family tenant house was constructed in 1859 and the quarry operated three lime kilns, located in front of the quarry, which at one time had reached the river. Over the course of 115 years, it had been mined to its current size and shape.

James Mulligan died in 1862 and the quarry business passed to his sons. Michael, his youngest son, took leadership of the quarry and expanded into ice cutting and storing operations during the winter. In 1875, when the railroad arrived in Clinton, it allowed him to receive coal shipments to sell during the winter months. Mulligan stone was also used for roadbeds in the region and building foundations in Clinton and beyond. Today, five quarry buildings remain standing: the quarry office, screen house, dynamite shed, blacksmith shop, and tenant house.


Bunker Hill School House
The Bunker Hill School House was built in Alexandria Township in 1860. Like most rural schools, it was one room and served students in first through eighth grade. This building replaced an earlier log structure that had been in use as early as 1818. The building was used as a school until 1921, when a larger school opened in Everittstown. After the school closed closed, it sat vacant and was at times used as a kitchen coop and a pig house. It was moved to the Red Mill Museum site in 1974.


The Log Cabin
The log cabin was constructed in 1976 as a special project commemorating the Bicentennial. It was modeled on the eighteenth century childhood home of General Daniel Morgan, a Revolutionary War general born in New Hampton, Lebanon Township, New Jersey using local documentation. The cabin is one room and contains a loft for storage and sleeping and a large hearth. A spring house, commonly found near a log cabin, was also built of native fieldstone. In addition to being a source of water for the family, spring houses functioned as cooler for the storage of dairy products, meat, and other perishables.

Since 1960, countless community leaders and volunteers have worked to restore and maintain this collection of twelve buildings, ten acres, and a collection of over 40,000 artifacts. The Red Mill was added to the New Jersey and National Registers of Historic Places in 1974. 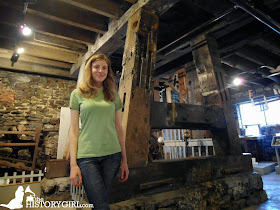 Do you enjoy the articles and features that The History Girl produces each week?
If so, consider a donation to keep the movement going!
The History Girl at 10:00:00 AM
Share

Thanks for the comments!