The New Yorker called it “a giant tea biscuit.” Some who see it are outraged at its “ugliness.” Others complain about its inaccessibility. Yet most are still awed by the powerful feelings that overtake them as they walk around the 10-story structure familiarly called the Teardrop Monument.

Originally titled Tear of Grief and now known as the Memorial to the Struggle Against World Terrorism, the giant sculpture is located in a most unlikely spot - on the tip of a man-made peninsula in the northeast section of Bayonne, New Jersey. From 1942 to 1999 the land was the home of the Military Ocean Terminal at Bayonne. Renamed The Peninsula at Bayonne Harbor, the area is currently being redeveloped into a mix of light industry, residential, and recreational space.

The Tear Drop Memorial is located in Harbor View Park, a pocket-size 2-acre green space owned by the City of Bayonne, located amidst dusty construction for a container port on Upper New York Harbor and a docking facility for Celebrity Cruises. In order to have a sense of the mixed vibes of the “neighborhood,” one must take a trip to the memorial.

In this out-of-the-way location on the Bayonne waterfront stands a 175-ton sculpture that moves many to tears in spite of what appellation one might give it.

Nine separate pathways lead to the structure. Its base has eleven sides on which granite name plates are etched with names of those who died on 9/11 and in the 1993 World Trade Center bombing. According to Emily Madoff, New York attorney for Zurab Tsereteli, the sculptor, the numbers of pathways and base sides represent the date of the attack on American soil: 9/11.

Above the base rests a 100-foot steel tower coated in bronze. In the center of  the tower is a jagged vertical opening which might represent the damage done to the various buildings by terrorists. Suspended from the top of the fissure is a 40-foot high stainless-steel teardrop. The monument is aligned with the missing Twin Towers and in direct view of the Statue of Liberty.

Renowned Russian artist Zurab Tsereteli was at home in Moscow and watched the collapse of the Twin Towers on television on that now-historic September day in 2001. On his drive to work later that morning he passed the American Embassy where people were gathered en masse shedding tears for the lives being lost and affected in the United States. The image of a tear remained with him, and he set out almost immediately to prepare a memorial for those who died in the catastrophe.

The beginnings of the commemoration had the seeds of controversy even before its inception. The name Tsereteli itself seems to set off a maelstrom of contention. While he has won acclaim for his artistic ingenuity, he has also been at the center of criticism for works in his native country and elsewhere. His 165-foot statue of Peter the Great, erected in 1997 in downtown Moscow, has the distinction of being the eighth tallest statue in the world. However, it has stirred feelings enough to have been voted the tenth ugliest building in the world by Virtual Tourist in 2008, and in 2010 Foreign Policy magazine included it in its list of the world’s ugliest statues.

We are told that Tsereteli visited what is now Ground Zero but decided to locate his memorial across the river where many of the survivors were taken. First, Jersey City was to be the site, but an outcry arose, protesting the type of monument and the suspected self-aggrandizement of Tsereteli. Residents and other opponents blasted the idea of such a tribute being in their city.

Bayonne was more welcoming. In fact, it was Guy Catrillo, former co-chairman of the Bayonne’s 9/11 committee, who suggested that the monument should not be merely a tribute to those lives lost but instead a statement about world terrorism. In September 2005 Russian President Vladimir Putin was on hand for the groundbreaking. The sculpture itself was designed and built in Russia, then transported in pieces to the US. The cost of $12 million is reputed to have been paid for by Tsereteli even though a black granite stone near the monument carries the inscription “Gift from the people of Russia - President Vladimir Putin.” Tsereteli’s grandson Vasili has commented, “He is a government employee, and he does many things in the name of the Russian government.”

Additional issues have ensued, one regarding the accuracy of the engraved names. It appears that Tsereteli used an outdated list of names. Of the 3,024 individuals recognized, 43 were later deleted from the official list.

Surrounding the site are hundreds of pavers with names of people who wish to be recognized as supporting the monument. Only this past January the bottom almost fell out because those renovating the port site pulled apart the fence surrounding the park. The excavators intended to  remove the pavers in order to proceed with construction of a new cruise ship dock. Frank Perrucci, chairman of the September 11 Bayonne Remembers Committee, said that there were cries of “You’ve got to stop them.” The City of Bayonne did indeed suspend the disruption of the memorial site. A building permit was necessary, and the construction team had not obtained it.

Since the 2006 dedication, two additions have been made: a four-foot section of steel from the World Trade Center has been placed near the sculpture as well as thirteen pillars honoring the residents of Bayonne who were killed on those tragic days in 1993 and 2001.

Perrucci and his wife Jean, also on the Bayonne Remembers Committee, proudly speak of the cross-section of people who have been to view the monument, some from as far away as England and Italy. “Each September 11 there is a beautiful candlelight ceremony at Harbor View Park,” says Jean. “It is a lovely, yet teary, marking of the horrific event.”

Now in his 80s, Tsereteli continues to hold the position of president of the Russian Academy of Arts. He is presently at work installing a 300-foot monument of Christopher Columbus in Arecibo, Puerto Rico. It is called the Birth of a New World.

Will the cool relationship of the US with Prime Minister Vladimir Putin and Russia influence visits to the Tear Drop Monument? If anything, all the controversy should encourage folks to see it for themselves. It is well worth the trip. 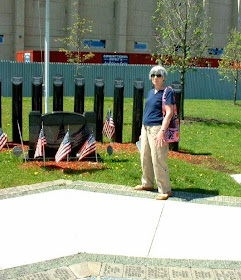 About the Author
A lifelong resident of New Jersey, Connie McNamara has lived in Mountainside since 1974. She graduated from Douglass College and earned an MA in English from Seton Hall University. She taught high school English for more than thirty years, during which time she served as advisor to the school newspaper, which won numerous awards from the Columbia Scholastic Press Association. A stint at Newsweek magazine interrupted her career in the educational arena. Later, as assistant editor at New Jersey Savvy Living, she renewed her calling to the communications field. Since then, she has been a freelance writer. Connie is the author of A History of Mountainside: It Was Only Yesterday, published in 2010 by The History Press.

Do you enjoy the articles and features that The History Girl produces each week?
If so, consider a donation to keep the movement going!
The History Girl at 10:00:00 AM
Share

Thanks for the comments!